Today the artist chatted with our team and amid the excitement of his new work as a sculptor, the Whipped Cream and Caramel Sculptures Series, he made us a surprising revelation. 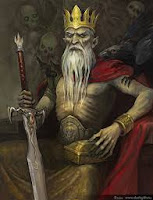 He believes he is suffering death threats by a person indirectly through artistic works, we tried to find out more about but he changed the subject but with a lot of insistence he ended up telling us that he noticed in the titles of another artist's work what seem to be threats to his life as well as a sculpture shot with shots reminds something of his own work, as if it were a message against his life.

We tried to find out more or to know where the supposed threats are coming from, he calmly just said that it doesn't matter that he's already got everything he needed here on earth, and that he's ready to leave if his time comes but don't be suspicious if he comes to die under any circumstance, especially suicids which he would never do at that age..

Then he smiled and added: "look, I've lived a lot, the earth is a very disharmonious place and I prefer to have peace, I had a good life and now let's have an ice cream and enjoy this moment guys... and so we can't talk about it anymore, anyway we are concerned and we hope that everything is just a big paranoia of this artist's brilliant mind..

The truth about RAP being born in Brazil