How was the Aesthetic Songs disc 1 born? 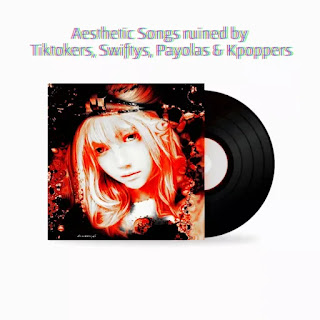 Contrary to popular belief, the Aesthetic Songs album was not born in 2022. And now we are going to tell the story behind all the songs.

This song, which is actually from disc 2, was basically the first composition that Rangels made on the guitar, but the lyrics were older since it was part of one of his poems written in 1997. It's a very old song that he always practiced on the guitar. , but only now found the right moment to disclose.

This is also an old song, originally called At stockwell Station, but the name was changed to have one word to fit the disc 1's aesthetic with all the songs having one word titles.

This song was first recorded in 1996 with a very simple cell phone, some of the hiss you hear are still part of the original audio.

The chorus was created years later, on the occasion of the murder of Jean Charles de Menezes by the London police, which generated a great commotion in the artist who fit this form of protest for crime in this passage in the song that was only romantic at the beginning.  And in 2022, there was a new adaptation to the Anglene language.

It is also an old poem by the author, but it has been revitalized by removing the weight of romantic love, for self-love.

This song has a somewhat tragic history, it was born after a car accident that the artist was in, on a vacation trip with some friends.  The trip was great, but the night a drunk driver hit his car, there were no serious injuries, but the car was badly damaged.

The rest of the trip was a heavy atmosphere, mainly because his friend was sad about the car that was his job, but the insurance sent a driver to pick them up and take them home, in the middle of the trip they stopped at a gas station, it was when Rangels heard a really cool beat of music in the bathroom, he thought it was someone listening to music, but it was just a faucet dripping rhythmically on a metal frame.  He then made a video and later this noise became the inspiration for this song.

And we can say that it was this accident that gave rise to the whole album, because it was after this sound that he decided to make an album with influences from rap, trap and hip hop.

This song was done entirely on the author's keyboard, he just sat down and played recording in one go, it was a huge inspiration, and it's one of the author's favorite songs.  The lyrics talk about his experiences with parallel dimensions.

This song is inspired and is a tribute to his childhood friends, where they walked the streets listening to rock music and making big plans.

A tribute to someone very special to the author, someone who underwent surgery to correct strabismus.

This song talks about the experience of being different the way the author lives, as he doesn't like songs that talk about heartbreak or promiscuity.

But, a song motivated by the author's personal experiences who live near the beach and love to enjoy a good lunch on the sand in the open air in front of the sea.  A curiosity was to have used an exercise device to be part of the instrumental of this song.

One of the slower songs on the record, a reggaeton beat demonstrates a fusion between Latin and American music, the lyrics speak of love and his religious experiences.

A very simple song that talks about feeling good when smelling the rain, but that also gained a comical tone with the music video when making fun of NASA's trip to the moon.

This song is also a mockery of famous artists who all act the same.  The sound already had a funny rhythm, but the inspiration for the lyrics came even when he went to consult the most played songs, then he realized that in several countries it was almost always a rapper throwing money up, and the female artists were all taking pictures with the tongues out.  The meme came ready-made, and the goal was to make a really fun meme song.

Another comic song, the intention was to make fun of pop music, making fun of some mainstream artists once again, but the lyrics in general are very good and the relaxed way in which it was made was interesting.

This was the last song to be made, and it's one of the best on the record, the chords came out naturally and the author wanted a song that explained what kind of music he does, and the result is Lyss, which although it sounds like an English word, it's a word from an unknown language that means music of the future, and that gives name to Rangels' musical style.

These are the curiosities we know about disc 1, if we have news about disc 2, we'll tell you soon.

Ps.  About the titles, contrary to what it may seem, it is not a criticism of the artists, but of the fans who organize themselves to defraud numbers on streaming services and videos.