Rangels letters: My participation in the Billions series

Axe arrives at the company talking to everyone excitedly "I want everyone motivated, today we are going to make a lot of money, everyone analyzing the reports from MicqXsteal". 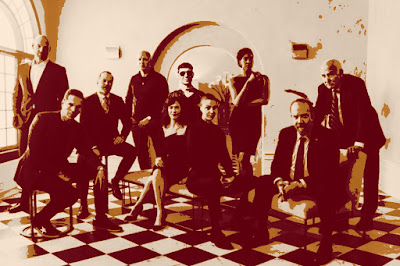 Beside them all notice a man dressed in black with aviator sunglasses, and Wags ask Axe "who is he?".  Axe replies "He is a friend, and also one of the greatest artists alive and enlightened, but it is none of your business to go back to work" so Rangels raises his hand and sympathetically says "Aisi", and Tuk Lal raises his hand timidly in greeting " Hi". Rangels smiles warmly at the assistant and Axe leads him to his office.

At the office, Axe says, "I'm always under pressure, but you always seem very calm. What do I have to do to keep myself that calm?"

Rangels says "why do you need to keep under pressure?"

Rangels  "I understand, but why do you need to overcome them? You have already overcome yourself. What you need most, my friend, is already out of total misery by the billions, this is already a great overcoming.

Axe  "you don't understand, i'm never satisfied, there is also the game to overcome these snobs who were born with the earned lives and still think they are better than me who started from scratch. Do you understand?"

Rangels "I do understand, but no, you don’t need it, there’s always an easier way to do all things and as for opponents, well I’ve been there already, I wanted to be great to show them, to overcome them, to humiliate them, but today  looking at me I realize that I don't have that feeling inside of me, they are living their mediocre lives and I don't care, you need to do things in a real way for yourself and not to show people, to be real.. "

Axe watches carefully, agrees with the head, what an enigmatic phrase, to be real, and Rangels laughs and asks "has coffee with milk here, can I get a cup."

Axe " of course my friend."

At that moment he receives a call from Spyros and Axe says "I will have to leave, come with me and I will explain how I do business."

Spyros is dressed as a Japanese lolita and with pink wigs wearing lipstick, Axe looks and says "I am not surprised" and Spyros says "I was in Sweden, you know, and discover me crossover with some chicks there..".

Axe "and then brought the material?

Spyros "yes in good quality, you will love it ..."

The material is a drug that puts an end to the human existential emptiness in addition to giving effects ranging from LSD to ayhuasca through antidepressants.

Axe says "let me see, great, this will help me beat Prince in business."

Spyros says "I realized that Swedes don't have a good distribution and we could get into the business by producing right here."

Axe "but is this illegal?

Axe “I love it!” He says this with a malicious smile.

Then he looked at Rangels who just raises an eyebrow.

Prosecutor Rhoades is in his office and observes images of Axe and his latest movements on TV, turns to Kate and says "what he is up to, we need to discover all this movement but what the hell, he is always one step ahead ..

After some days Axe is invited by Spyros to see something new, Spyros is dressed in colorful lolita, white pants and pink wig, is in a dark place, above rehearses a male ballet company that are also chemists and pharmacists and work underneath dressed in clothes of male dancers and dance while they produce, it's a laboratory, Spyros was producing the Swedish drug and was going to start selling to big billionaires in the world ..

Axe says, "You are crazy, I told you not to do this, although I must admit it did quite a job here ..

Spyros says, "is that I have currently opened my mind and my horizons.."

Axe put your hand on Spyros' shoulder "you improved a lot my friend ..

Rangels is with him and then Ax says "but we have to stop everything, I don't do this kind of thing anymore although keep a good amount for me .." "let's take a look at what we have here".  It was a very big place, it looked like a maze ..

At this moment, there is a narcotics police invasion, everyone runs away, the prosecutor Rhoades is ahead feeling like a man for the first time, the confusion is widespread with several dancers running jumping windows, Spyros, Wags and Rangels manage to escape by jumping over a wall, the police are not going after the prosecutor had already achieved what he wanted ..

"Now, what we have here, the great AxelRose involved in drugs, I always knew that you would fall alone one day, I didn't even have to do anything", and he came close to Axe's ear whispering, "once from the guetto always from the guetto ..  "

Axe looked calm and said "You know Rhoades in other times, I would be very upset with this comment, I sincerely like you and that doesn't matter to me anymore, you won, celebrate your victory today .."

This left Rhoades confused, he finally got it for Axe in jail, but because Axe made him appear to have won ... what was happening ... in fact Rhoades also liked Axe and the dispute was always for the attention of his ex wife, who always  he had a secret and repressed crush on Axe, but that made no sense now that they were definitely separated.


Axe spent 2 years in prison before being paroled, during which time the company was hired by Taylor and Wags, and prospered even more, but Stearn left the company in anger that Axe had chosen Taylor over him.  And now he defended communist ideas while drinking at a bar.

Stearn is bearded with big hair on the sides and says .. "look who is here the great defeated traitor and bourgeois Axe who left Taylor in charge .."

Axe looks ironically, ignores him and orders a beer ..

Stearn turns to Rangels and says "and who are you? Another rich capitalist?"

Rangels laughs lightly and says "you don't know anything about me, and what do you have against the rich? They are the ones who generate thousands of jobs and even pay the taxes that bring benefits to society.

Stearn says "Can you believe this guy, where did you find him, Axe?

Axe gets up and says to Stearn, "I'm going to a bookstore to buy a book on art history with my friend here, you can come with me if you want, you and your troglodyte friend there, learn a little about art ... " and walk away..

Wags looks at Stearn: "are you coming?

Stearn then abandoned his ideological speech and aggression and embraced Axe, "I missed you too, man."

Stearn "What are we going to do now?"

Axe "After buying the art book, my friend and I are going to open a bank ...

Wags "Again, this story will never allow you to open this bank here ..

Axe "and whoever said it will be here, this country is too small for my new aspirations, the USA does not rule the world.

"We are going to open the largest blockchain-based bank in the world with branches worldwide, and here we will use someone else to open our "competitor" who will also be ours .. Consummatum est, fellows!


Ps.: This whole story was not created by me consciously, it was a dream that I had tonight, I found it very interesting how my subconscious can create a complete and well elaborated episode for a series that I like.  What did you think?  Leave your comments.  Aisi
Email Post
Labels: Art Behavior Lifestyle Movies Scenes Series Wealth World